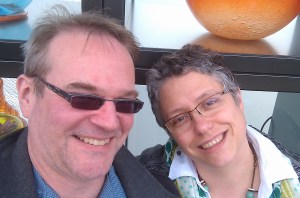 I asked Steve a while back if I could contribute a blog post to the Harp Herald.  I share Steve with harpists across America for about ½ the year, so I figured it was time I shared a little about what it’s like to be at home with him during the other half of the year.

One of the most common questions we get is if our daughters play the harp. No, they don’t play the harp.  But they are musically inclined.  They did take lessons from two amazing teachers, however, and we have a blue Lyon and Healy Folk Harp.  Our younger daughter has actually gone to sleep every night for the last five years listening to harp music.  Annie’s favorite:  Anne Lobotzke’s Daughter of the Stars.  Runners up:  Suzuki Book 1, and Park Stickney’s Still Life with Harp.

To answer the next-most-asked question:  Yes, it’s hard to have Steve on the road so much.  Steve’s gone about 2 weeks a month.  Sometimes more.  Often, it’s hard.  Sometimes, he comes back and it’s been so easy that we hardly realize he’s been gone.  But, other times, it’s tough.  My girls think I only know how to cook out of Trader Joe’s boxes.  When we moved to Oregon, Steve was on the road.  Moving to West Lafayette, Indiana, this summer however, Steve was with us for the move, and for a couple weeks afterward, too.  (Score!)

I’m proud when I think that in some circles he’s famous.  He described a time when he worked on a family’s harp, and the daughter was super excited that “Steve Moss, the guy from the video, was actually IN her HOUSE!”  He’s in my house, too, but he hasn’t made a video with instructions on how to find the missing earring in the sink trap, or how to make the kids’ favorite dinner, Walnut Pasta with Parmesan.

Our older daughter goes to Interlochen Arts Academy, studying opera.  A harpist friend stopped her one day and said, “Hey, Liza, Steve Moss is your dad, right? Oh wow! Mrs. Holland was talking about your dad in class today!”  The other girl thought it was so cool that Liza’s dad was some kind of harp celebrity, but Liza shrugged.  He’s just her dad, to her.

We joke about people who have jobs with niche markets smaller than his.  We thought about writing a book, profiling people with jobs that are more “niche” than his, but someone beat us to the punch.

So what does Steve do for fun at home?    He writes songs, plays the grand assortment of musical instruments we own – from an electric guitar to a clawhammer banjo, to the violin, and the cardboard box bass.  He has a cardboard harp kit on his workbench right now, and the remains of a coffee can banjo in a drawer.  When he’s not building, rebuilding, or playing instruments, Steve is also a Brown Belt in ATA Taekwondo, which he does with our younger daughter, Annie, and he has been making awesome electronic music with prerecorded samples.  His current project:  making a tiny lathe out of the motor of a vintage sewing machine.  Stay tuned to the Harp Herald to see if he decides to turn columns for the world’s smallest harp!

I will be undergoing heart surgery to replace my aortic valve on April 11, 2011. After the surgery, I will not be able to lift more than 5 pounds for 6-8 weeks. I have canceled or postponed my scheduled trips to Salt Lake City, Sioux Falls, and Dayton for April and May. I hope to be sufficiently recovered to resume my normal schedule in June, including visits to Austin and Salt Lake City.

I expect to be in the hospital for five days, away from access to email and phone. After arriving home, it is difficult to predict how quickly I will be able to begin returning phone calls, but I encourage you to call or email with any questions you may have and I’ll get back to you as soon as possible. It will still be possible to order my DVD, Harp Care with Steve Moss, during this period. My family can help fill the orders if I am not able to.

This surgery came about because I was born with a defect in my aortic valve, and its function has slowly worsened over time. I have been aware that I might need this procedure at some point. I expect to make a full recovery after healing up from the surgery, and the doctors tell me I’ll feel better than ever, since the mechanical valve will improve my heart function.

I apologize for any inconvenience to you, and would like to take the opportunity to thank all of my clients, associates, and friends for your business and your support over the past few years. I look forward to working with all of you again soon. 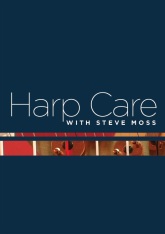